Cumberland Gang Show is one of the best Gang Shows in the Country, and one of the largest too! 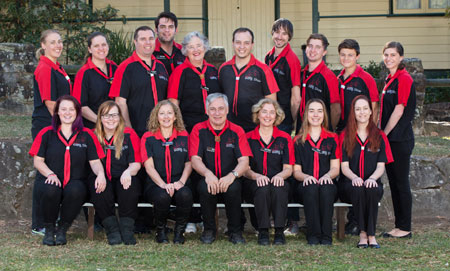 The Production Team start work a few weeks after the end of the previous season and spend about six months creating the technical script. This means meeting on a weekly basis, writing brand new items as well as painstakingly selecting the best from the huge collection of over 2,500 items from the Gang Show database.

It also means completely producing each item, specifying the sets and costumes, defining the special requirements in each department, working out all the movements and dance routines and finally teaching it to everyone in the cast during rehearsals. After the script is complete, we have Auditions.

Auditions are huge! We spend two days audit ioning between 160 and 220 people. We then run the Cast Selections computer program which picks the top 144 for the cast and randomly assigns the juniors to the two casts. The next task is Casting. This is another huge job, made easier by a sophisticated Casting program which organises everyone according to height, singing ability, dancing ability, acting ability and so on, making sure each person is fitted into one of the over 1,500 parts in the show.

The Production Team make sure that the main roles are shared out fairly, that no-one is in two consecutive items (where they wouldn't have a chance to change costumes), and that everyone is occupied in each rehearsal bracket. After that comes rehearsals!

Follow us on social media to get updates, exclusive deals and discounts!